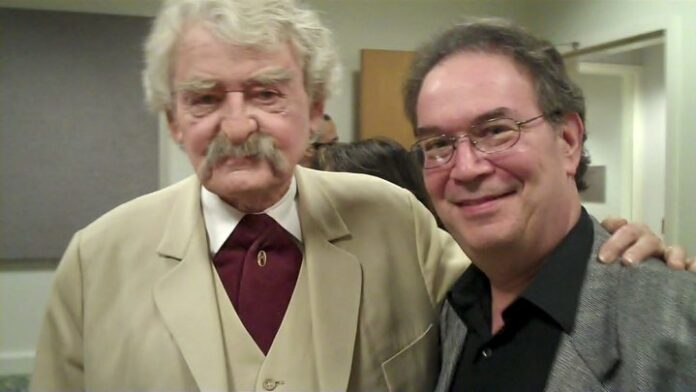 Hal Holbrook the celebrated actor who first came to fame for his one man show “Mark Twain Tonight!” and went on to play a tremendously diverse number of characters on stage, television and movies, including the corrupt cop in one of the “Dirty Harry” movies and “Deep Throat” in “All The President’s Men” passed away in late January 2020 at the age of 95. What a life!  And what a mensch!

I was first introduced to “Mark Twain Tonight!” when it aired as a special on CBS back in the early 1970s. I loved that show so much that I bought all three albums with highlights of the show and even, as a teen, did my own 30 minute version, right down to spraying my hair white, gluing on a crepe hair mustache and donning a white suit.

During my senior year of high school, I was Arts in Review editor of my school paper. That year, Holbrook was scheduled to come to St. Louis for a one night only performance as Twain. A couple of weeks before hand, as so many high schools do, we had a career day and one of the local pros I met with was the entertainment editor for the St. Louis Globe Democrat, the big morning daily in town. I told him that I’d love to review the show and interview Holbrook but expressed doubts that a mere high school student would be able to do so. “I don’t see why not,” he said and asked that I call him at his office the next day., which I did.

A day or two later, I got a call from the guy who was promoting Holbrook’s local appearance who graciously offered me a pair of tickets and said that when Holbrook arrived in town the day before the performance, he would ask about an interview. Shortly afterwards, I was informed “Mr. Holbrook will see you after the performance.” Wow!

I didn’t tell my date that night until intermission that we were going to meet him after the show. I had a tape recorder in the car which I quickly retrieved so I could record my interview and we spent 45 minutes in his dressing room as he was taking off his makeup. As an interview subject, he was gracious, articulate and responsive. Who could ask for better?

A couple of years later, when I was a sophomore at the University of Georgia, Holbrook was scheduled to come to Atlanta to perform Twain at the Fabulous Fox. Since I still had the tape of my interview, I went to the editor of the college paper and offered to write up highlights of my interview. Not surprisingly, they snapped up that offer.

Then I went to the local promoter and asked if having an article about Holbrook appear in the University of Georgia paper was worth a couple of comps to them (I was a cheap date to be sure) and they said, “hell yes!” They also invited me to a special press conference that Holbrook was holding the day before his performance specifically for high school and college press.

Over the years, I’ve had the pleasure of seeing “Mark Twain Tonight!” live a good half dozen times. Each performance was a different and unique mix of material since Holbrook had accumulated some 15 hours worth that he’d pick and choose from while on stage.

One of the interesting things he said when I interviewed him was that he always kept a log of what material he did after every performance so that, when returning to the same city, he’d be in a better place to choose what he’d do for his next performance.  Since Holbrook had all that material to draw on, and was regularly updating his repertoire, every one of the 2000+ performances he did as Twain had a different mix of content. It was one of the reasons I loved seeing him perform live as each performance had an element of surprise and discovery.

I also learned that he had a tradition of hosting an informal reception for anyone who wanted to meet him after the performance. But you had to know to ask. Needless to say, once I learned this tidbit, I always asked and attended after each performance.

So thank you Hal Holbrook for introducing me to the works of Mark Twain beyond Tom Sawyer. Thank you for creating such an iconic classic of the American Theatre and thank you for a fabulous body of work above and beyond Twain.